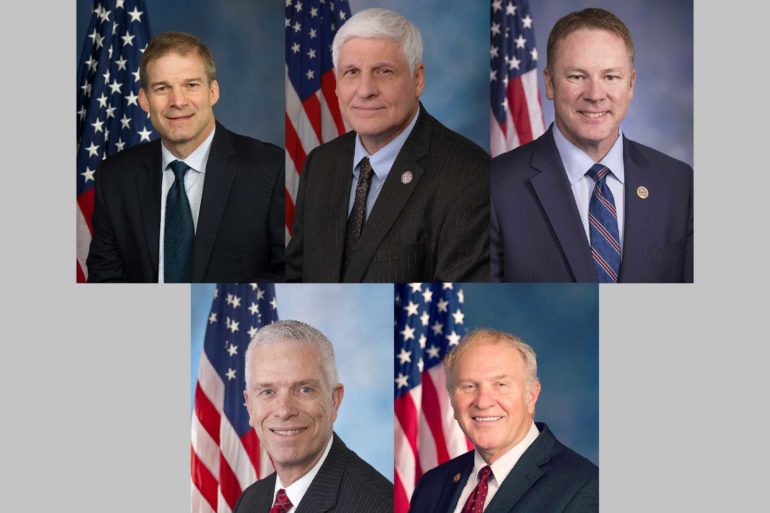 Five Republican members of Congress from Ohio voted Wednesday evening to reject an Electoral College certification, an action taken hours after a right-wing mob stormed the U.S. Capitol building in a violent show of support for overturning the presidential election results.

Those objecting were U.S. Reps. Jim Jordan of Urbana, Bill Johnson of Marietta, Bob Gibbs of Lakeville, Steve Chabot of Cincinnati and Warren Davidson of Troy. They were unsuccessful.

Most Ohio Republicans in Congress opposed these efforts to object to the Electoral College count, including U.S. Sen. Rob Portman. Democratic U.S. Sen. Sherrod Brown said those who did object “should be ashamed of themselves.”

The Wednesday evening votes capped off a chaotic, violent day in Washington, D.C., one featuring a joint session of Congress to count the Electoral College votes that were already certified by the 50 states several weeks ago.

Wednesday’s proceedings were historically ceremonial in nature, but supporters of the president viewed it as a last stand for attempting to override the electoral victory by Democratic President-elect Joe Biden. Shortly after debate began Wednesday afternoon, insurrectionists made it past law enforcement barricades to force their way into the U.S. Capitol. The building was put on lock down, delaying the joint session for several hours. One woman was killed in the violent demonstration, according to news reports, and several police officers were injured.

Dozens of political officials from Ohio condemned the violence, from Gov. Mike DeWine to all 16 members of Congress from the Buckeye State.

Jordan, Johnson, Gibbs and Davidson had announced plans ahead of time to object to the count. In various statements, the four said allegations of widespread voter fraud in key battleground contests won by Biden led them to reject the state certifications of Electoral College votes awarded to him. Chabot had written in a blog post prior to the joint session he would make a decision on whether to object after hearing debate on the House floor.

Specifically, the quartet of Jordan, Johnson, Gibbs and Davidson voted to reject the count of the state of Arizona. Chabot voted against rejecting the Arizona count, but later joined those four in objecting to the count for the state of Pennsylvania.

Jordan defended the objections in a speech Wednesday afternoon on the House floor, citing Trump’s rally attendance as proof he could not have received fewer votes than Biden. The Democratic ticket held few in-person events with limited attendance on the campaign trail because of the pandemic.

“We are the final check and balance,” Jordan said. “The authority rests with us, the United States Congress, the body closest to the American people, right where the founders wanted it. We should do our duty. We should object to and uphold this objection to the Arizona electors.”

There were no other valid objections among the remaining 48 states. The joint session of Congress concluded at around 3:45 a.m. early Thursday morning.

Portman spoke out against the objections on the Senate floor and said he wanted Americans to see the U.S. government would “not be intimidated” by the violence earlier in the day.

Portman was a co-chair of Trump’s reelection campaign in Ohio and acknowledged Wednesday he had hoped the president would win another term.

But he could not support the Congressional efforts to overturn the election results.

In a conference call with reporters prior to Wednesday’s violence, Sen. Brown spoke critically of those objecting to the certification.

“I think they should be ashamed of themselves,” he said. “It really is outrageous what they’re doing.”

Brown referred to them as “jellyfishes” and claimed their objections stemmed from being fearful of standing up to President Trump. Brown had intended to speak out further on the floor if the Michigan count was formally objected to, but no valid objection of that state was filed.

A large number of Ohio political figures from both parties reacted to the violence in D.C., all of them condemning the actions of the insurrectionists.

Lt. Gov. Jon Husted said the events looked like “what we would see in a third-world nation.”

“It does not look like America,” Husted tweeted. “It is not patriotic.”

House Minority Leader Emilia Strong Sykes, D-Akron, replied to Timken’s statement and said the chairwoman should “save these shallow words for someone else.”

No. No. No. No. No. You own this Jane. You and the entire party you lead. Save these shallow words for someone else. This is on you and then rest of the republicans who let this crap happen for years. You wanted the glory. Now you take the blame. https://t.co/rzGd9ksc37

U.S. Attorney David DeVillers of the Southern District of Ohio pledged to prosecute anyone within his jurisdiction who committed crimes in the nation’s capital.

“5 Ohio congressmen object to Electoral College count in effort to overturn result” originally appeared on Ohio Capital Journal on January 7, 2021. You can visit their website here.

Billions Of Cicadas Will Emerge In Ohio This Summer. Here’s What You Need To Know

The Best Vistas In Ohio